So. I don’t have to tell you what today is the anniversary of. You can’t look anywhere, online or IRL, and not see some kind of red-white-and-blue reminder that this is the tenth anniversary of the attacks on 9/11. I am of two minds on this. On the one hand, I have family that is (or was) in the military and feel very strongly about this date. I have friends who lost people they loved. I am generally (despite my penchant for mockery) a pretty compassionate, kind person. On the other hand, there’s this: 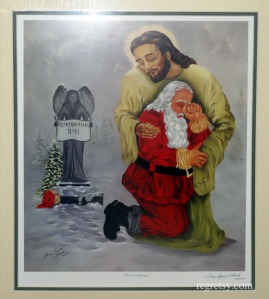 Ten years ago, I was a month away from my first wedding anniversary with M. I was working in downtown Portland at a catastrophically dreary job as a receptionist. M must have already gone to work because he wasn’t there. I took a shower and remember hearing something about all the airports in the country being shut down because of “the situation in New York.” The fuck? I remember thinking. I was still kind of tired as I got dressed – I even remember what hideous fat-girl out fit I was wearing (white T-shirt under a blue jumper).

The dress on the left, but blue. And fat.

The television was on the bureau at the foot of the bed. I turned on the news as I put on my socks. I remember vividly standing on one foot, my sock still in my hand, as I saw the pictures. I was dumbfounded. I don’t know how long I stood. I know it was Tom Brokaw talking; I always think of the attacks when I hear his voice. I had to run to catch the bus, so I put on my headphones and walked to the bus stop like a zombie. On the bus, you could tell who had heard and who hadn’t. About half the bus was gossiping, laughing, usual morning stuff (it was a pretty friendly regular group). The other half looked stricken; dazed. The woman across from me and I locked eyes in horror when they reported the first tower falling.

I don't want to put pictures of an atrocity on my blog. Here are some Legos... Oh. Oops.

When I got to work, the entire office had shut down. Most people were in the conference room watching the news. I had to keep an eye on the front so I kept wandering back and forth. The company I worked for had an office near the towers. We already had confirmed they were all safe, but people were texting photos of the dust clouds. It was just overwhelming. I don’t remember much of the rest of the day. I remember nobody ever did any work. We were a sales office, and no rep was going on appointments that day. I think the entire country just stopped in its tracks. Its unforgettable, that sensation of being unified with a tremendous number of people. Powerful and humbling. At some point I went home for the day. We watched news all night.

There was some convention at the end of that week, and my boss asked if I’d put together some red, white and blue ribbons to have at their booth. I spent the rest of the week sitting at my desk, stitching at these little lapel ribbons and watching movies on my laptop. Normal business didn’t resume until days later. That Friday night, the karaoke bar was subdued. The KJ got up and sang New York State of Mind and there was a moment of silence. Most of the songs were downbeat or overtly patriotic (Proud To Be An American showed up more than once).

Now here it is, ten years later. I’m betting the same patriotic songs came out in karaoke bars everywhere (Sarah? You want to back me up on this one?) and that people were wearing the ribbons. I don’t know how I feel about any of it anymore. This country sure as shit doesn’t feel unified anymore. There is so much vitriol, so much hate and fear and divisiveness. The news media has become such a multi-armed clusterfuck that it should start producing anime. When we heard Bin Laden had been killed, we didn’t turn on the news. We read news on the internet where we wouldn’t be bombarded with the partisan fucking bullshit. I am so sick of every little thing being blown out of proportion. I’m tired of how much material The Daily Show has. I can’t really understand why politicians and pundits can openly contradict themselves on the air, be confronted with it, and…nothing happens. What in the actual fuck has happened to this country? 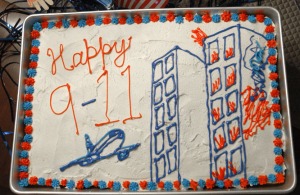 I don’t know. Not to mention all the questions around the attacks. I’m not one of those “9/11 Truthers,” but I’ve seen Loose Change and other documentaries about it, and I wouldn’t say that the official story makes perfect sense either. But that aspect invariably comes up whenever you talk about 9/11, which says something. On the flip side, just because a conspiracy theory comes up often doesn’t lend weight to it. 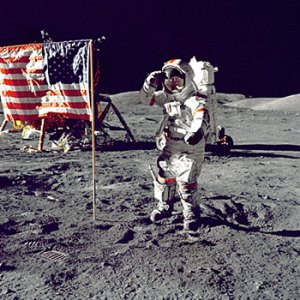 I guess I’m mourning my country more than the attacks. I didn’t lose anyone personally, and though I found them to be very shocking and sad, they didn’t affect me the way they would if I had. But in the last ten years, I’ve become more and more embarrassed by my country’s behavior. I’m so enraged by being represented as an American woman by the likes of Sarah Palin and Michelle Bachmann that I break out in a rash. And I really hate to think about to what this looks like to other countries; this sick circus of memorials and blamestorms and scapegoats and publicity tours. 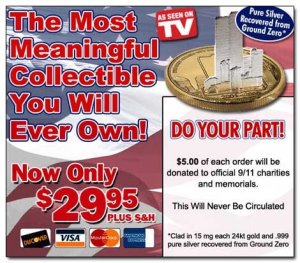 It's legal tender in Libera!

I miss my country.

What the hell was I looking for again?

Other Sites I Deem Worthwhile

Atheism, Humanism and Freedom From Religion Family and Framily How I Met Your Father Isaac Kitchen Creations & Recipes Letters From the Mommyverse Life, The Universe and Everything Living With ADHD My Bottomless Need For Attention Sex, Gender, Feminism and Other Shit That Shouldn't Be So Damn Controversial (But Is) Spoilerific Movie Reviews The Adventures of Baron von Munchausen (by Internet) The Crazy Train The Princess Diaries
%d bloggers like this: